When painting, I try to create a space in which I can move between playful abandon and intense consideration; one relies on the other.

The painting provides a lull… 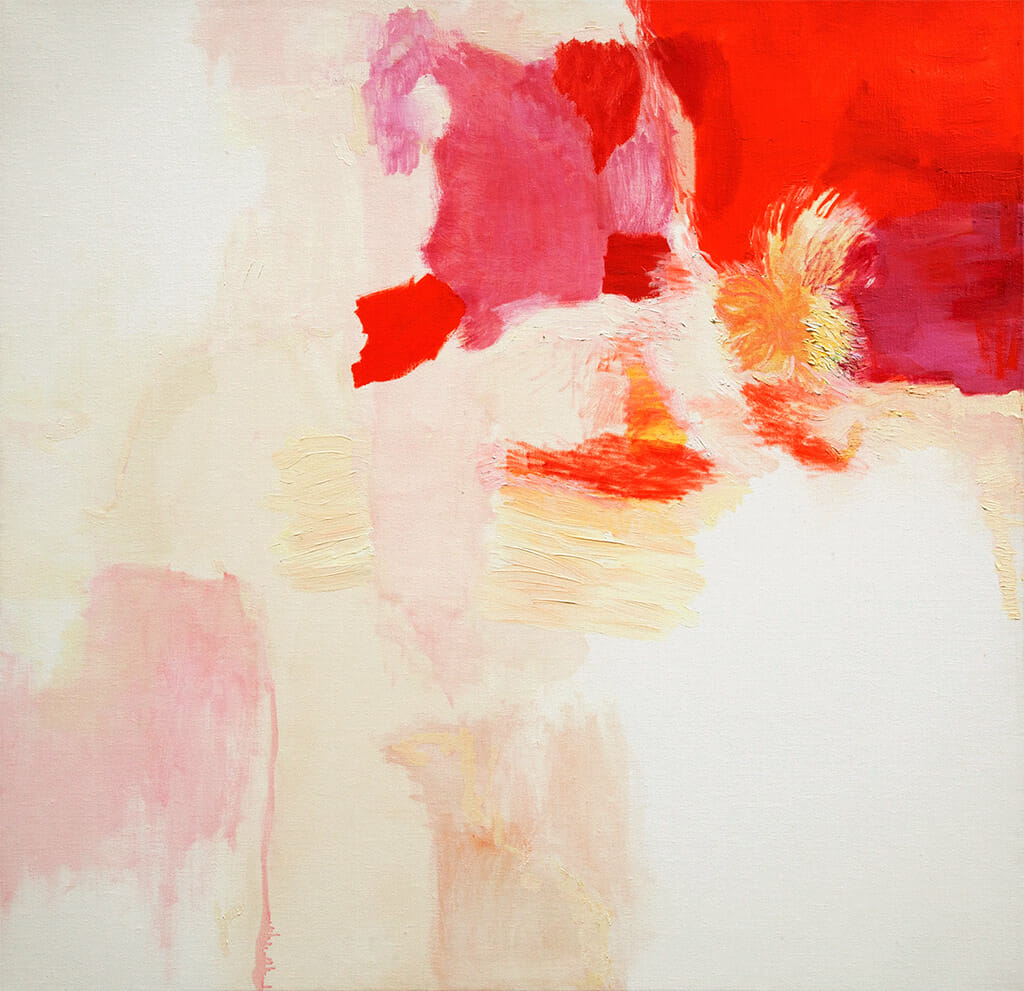 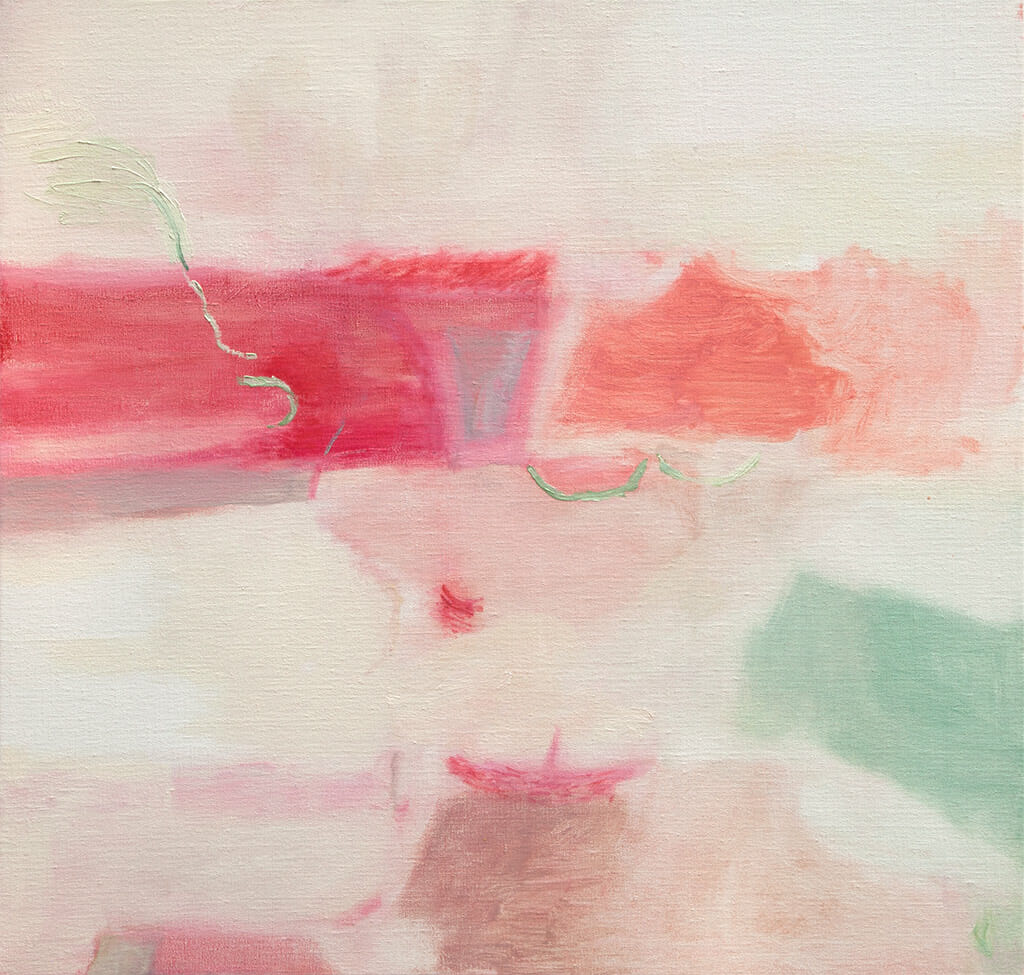 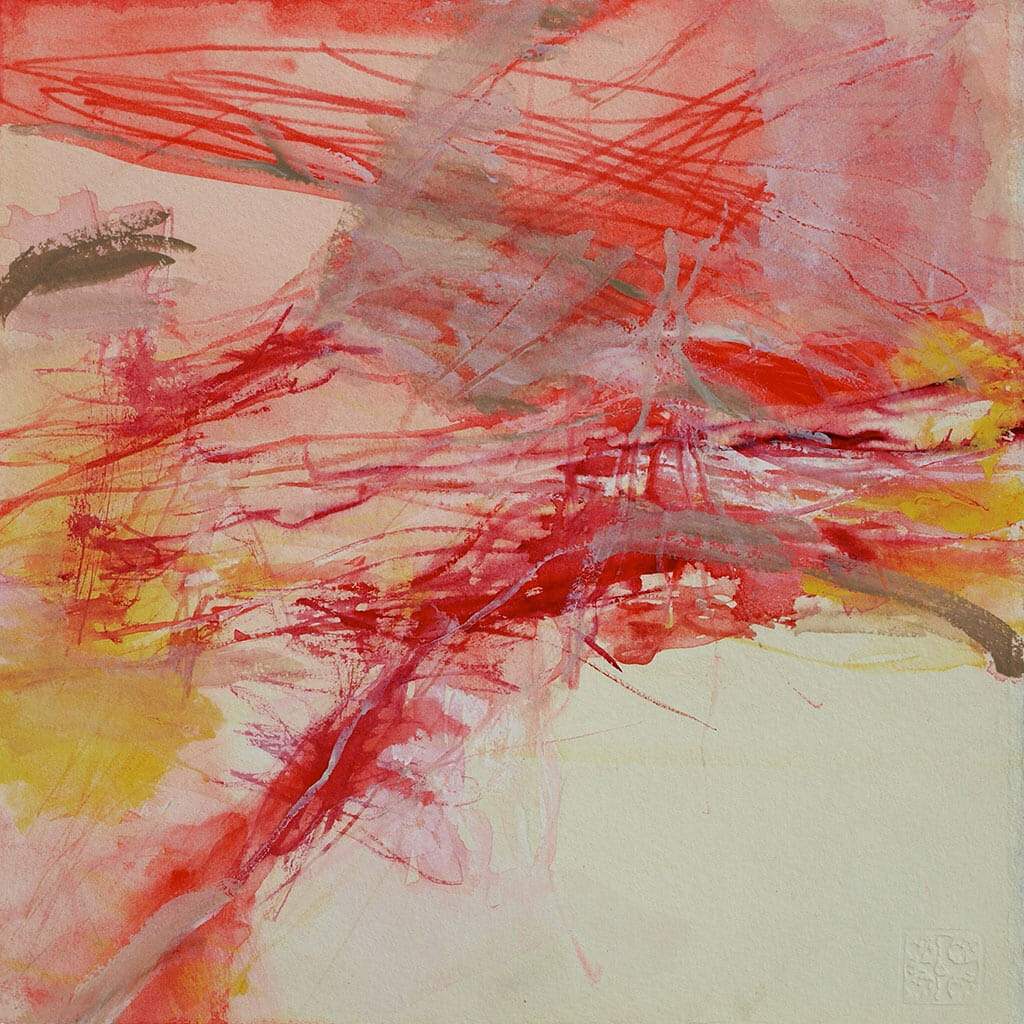 Victoria Cattoni’s precariously balanced compositions are puzzling, beautiful and exploratory works of the imagination. The work displays a sensitivity of touch, a delicacy at times set against areas of intense deliberation; there is a balance of fields of colour undone by distinctive, even lyrical marks, lines and awkward twirls; much of the canvas remains white, untouched. And then there is the tension of intense colour harnessed within large areas of soft and muted tones.

It’s a visceral experience that begins and ends with colour. You’re on a journey where certainty evades you but you are transported by the temptation of colour. Much of the work alludes to landscape but you can’t quite grab what it is you see, the gravity is not fixed: there are only suggestions, evocations. You get sidetracked: distinct, often tiny areas of sensually rendered paint and brushwork urge the eye to focus. Seemingly incongruous elements hang together within competing areas of shallow and deep, receding space. You are pulled between integration and non-integration.

The natural environment is the backdrop to the physical space in which Cattoni prefers to work. This, and the light of her surroundings especially, have a bearing on her palette. However, the foundation of this palette is largely intuitive and many of her canvases are dominated by the use of pinks and magentas. Unafraid of the pinks, she approaches her palette with rigor and the paintings display the nuance and confidence of a competent colourist.

Victoria has recently relocated to Australia, after 18 years of living in South East Asia. During this period - 1998 to 2016 - she exhibited widely, participated in and coordinated international events, and collaborated with contemporary artists and local arts communities in Indonesia, Malaysia and Singapore. She was the recipient of a number of major arts grants and scholarships supporting her artistic work in South East Asia during this time. Prior to living in South East Asia, Victoria already had a solid arts practice of 10 years including 4 solo shows in Australia, two of those painting exhibitions. Her practice up until 2012 in both Australia and South East Asia had also included installation, site-specific work, performance art and multi-media work. Then, in 2012, while artist in residence at Foundation Obras, Portugal, she completed the first large-scale paintings she had produced in over 20 years. Much of the work on this site has been produced during art residencies at Obras; other work is from time spent in Tasmania, Australia.

Victoria Cattoni is represented by ReDot Fine Art Gallery in Singapore, where in 2015, her solo exhibition of paintings and works on paper, ‘Pinturas’, was held.

other art from Victoria Cattoni. http://www.victoriacattoni.net/